I should begin with saying that both Tigger and I are home and that she is doing well.  Now I get to tell you that Tigger was hospitalized on Friday first for asthma and secondly they found out she had Pneumonia.  It was a rough weekend.  I was stressed out, Tigger looked bad Friday, and I'm switching Pediatricians.

First of all, I had been concerned about her health and had taken her in.....Pediatrician who has not done much for her when she's ill even though her other one had, sent us home telling me she would probably just get better....but to bring her back in if she still had a fever amidst my urging that the only reason she didn't have a fever was because I had given her some Ibuprofen.  Well, she just didn't look well and spiked another fever and that was it, I took her back and sure enough, by that time she was having asthma, and looking horrible enough that the Dr. immediately phoned the Hospital and within the hour we were transported by ambulance over to the hospital where we would stay for the next 2 1/2 days.

Tigger was a champ.....all the nurses fell in love with her, (of course who can resist) because she is an easy patient, she takes all her meds like a champ and doesn't thrash around.  First night in the hospital was just her and I.....luckily the chair in the room was a pull out bed chair although it is more of a cot really, smaller than a twin size bed and I didn't get much sleep....Tigger wasn't having a great night, Oxygen levels were down, and she needed breathing treatments quite regularly.  When we woke up and spoke with the Dr., they had found spotting in her lungs indicative of pneumonia and were going to keep her for one more day.  They also did that viral panel for RSV which then meant Tigger was in isolation and we got to wear awesome hospital gowns and masks so as not to pass out bugs if we went in and out of the room.  While we had family over visiting, Tigger had an asthma attack in front of all of us.....not very cool.  Luckily it calmed down once the nurse was called and she received more inhaler medicine.

The second night went so much better.  Tigger's fever broke and was steady at 97.8, she slept well without having coughing or asthmatic fits, S who had to work Saturday morning so couldn't stay the first night, spent the night at the hospital with us in that small cot....that was a feat!  He was a great help....and he was able to get Tigger to eat more food when I couldn't get her to eat so I was very thankful he was around.

Sunday afternoon we were finally released and now I'm just taking care of her and luckily I have some family that can help take care of her this week as she can't go to preschool for a week.  So I can still go to work some days this week as well.  And that was our summary of the weekend.  When I write next, I'll incorporate how adoption, lack of medical knowledge, and this visit went.  Some funny moments....but really, the first time lack of medical knowledge left a real uneasy feeling, even if the questions were minor.

Email ThisBlogThis!Share to TwitterShare to FacebookShare to Pinterest
Labels: me, Parenting, single parenting

By the title of this blog post, one might think that I did major pondering today in regards to our holiday (Martin Luther King Jr.), which is not really the case.  I was happy I had one more day to spend with Tigger and S and so spent most of the day enjoying that.

My reflections are merely wondering how the future will pan out.  Will our nation truly go forward in terms of diminishing racism or at least diminishing racial bias?  While we are no where near where our country was during the life of MLK, it is evident that racism is alive and well still in this country. I ponder how life will go for my little princess.  She is adored now as a 2 year old.  Will she still be adored as she grows up?  will she encounter the ugly side of life dealing with racist remarks?  My hope is that no she wont, and if that is the case, then I am doubly thankful for everything Martin Luther King Jr. did and stood for.  Anyone who has fought not only for civil rights in general, but for children, children like mine and others....well they have my respect!

Well during this week, I had S over two times for dinner and TV.  He's getting to be quite regular around here!

I also practiced more hairstyles on my Tigger and feel like I can do her hair justice and can always improve.  It's been a good week. 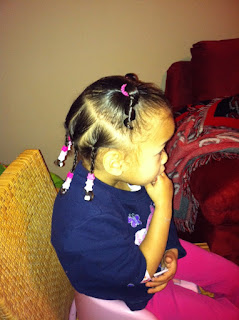 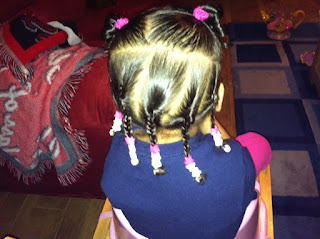 Email ThisBlogThis!Share to TwitterShare to FacebookShare to Pinterest
Labels: me, Miscellaneous, Parenting

I've made no secret that Tigger is biracial and that I am the whitest Hispanic person on the planet along with a history of not caring about my hair.  Well dear friends, those days are over.

Fortunately Tigger's hair has been easy to maintain, however, it is growing more and I notice that it tends to dry and frizz like no one's business very quickly.  So I've been learning about hair care these past 3 weeks, what curly hair needs are, what biracial/multiracial hair needs may be, etc.

1)  I've learned about a a line of products (shampoo, conditioner, moisturizers, cream) that works for Tigger's hair.  I mean yeah she looks like she's played, but the hair....well it's not out of control when I pick her up from preschool anymore.  Yay!  I know it will make her happy in the long run because she loves looking pretty.

2)  I've learned that I'm not good at braiding, I need practice, and that YouTube is my friend.  I tried to braid Tigger's hair for the first time tonight....nothing fancy, but regular braids....I failed miserably, but it prompted me to go to a couple of blogs about hair that I've seen recently and to YouTube, so I feel more prepared to go at it again later this week.

Why am I blogging about this?  Well because I think it helps foster a child's self-esteem to know they are put together and look their best.  This is one of the many ways in which we are not alike and another reminder of the adoption connection.  Instead of not celebrating that difference, I think it's important to make sure she learns to take pride in herself....from hair to toes!

Please enjoy my horrid first attempt.  My promise to Tigger is that I will continue practicing and getting better!  Mami loves you Tigger! 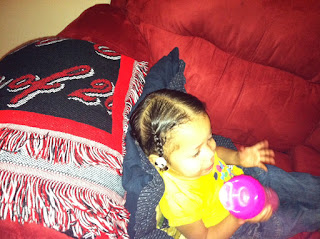 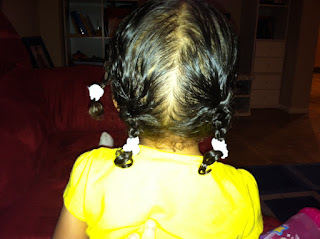 I don't think I've made it a secret that I grew up as a tomboy.  If you didn't know that, here's a rundown of my favorite toys/activities as a child:

I also could have cared less about styling my hair and was happy to let my mom do my hair and not learn anything about it til I was in high school.  Yes you read that right....high school....then I cut my hair short.

Then I became a mom.  And this is what my daughter loves at the moment:

And today as we were getting ready for a viewing/funeral (yes I'm Hispanic so we do take our little kids to these things as lessons such as life/death are taught early) she goes into my closet and takes out a scarf and told me I needed to wear it with my dress....what was funny was that the scarf actually matched/went with my outfit.  I was floored.  Apparently I already have a fashion designer/adviser.

Oh and I also was blessed with a daughter that has curly hair.  In other words, this tomboy mom is constantly scouring the internet, help from friends, and learning as she goes to make sure Tigger has great hair....

Ironic much?  I have to say, I am intrigued by this 'girl' world though!  Am glad to be part of it!

1.  start living a healthy lifestyle and maintaining it:
a) regular exercise.....doesn't matter how much weight is lost, but the exercise is what is important
b) eating more meals that are homemade instead of out of a can or drive through....this includes LUNCHES

2.  Make sure to buy something for me as well every month....while outward beauty isn't everything, taking time to look presentable sends a strong message of self-esteem that is a positive influence in one's life and in your child's life

3.  Change from checks going out every month to online bill pay (I hate changes that involve the internet)

1.  Clean the fridge monthly instead of when I think about it

3.  organize drawers and closets in a room....dedicate one month to one room until it is purged and organized

Let's see how these goal pan out.  Day by day!

Email ThisBlogThis!Share to TwitterShare to FacebookShare to Pinterest
Labels: me, Miscellaneous