Don't you want to know the history behind the silly carol "Rudolph The Red-Nosed Reindeer"?  Please go here for the full story, but did want to tantalize you with an excerpt:

A Ray of Sunshine for a Sad Little Girl

"Rudolph's story begins sometime in 1939. The nation was still in the midst of the Great Depression but that didn't prevent people from celebrating and enjoying the good times of life. Times may have been difficult but that just meant that people had to be more careful with their money.
In the Chicago headquarters of department store giant, Montgomery Ward, that summer, executives were making plans for the coming Christmas season.
In those days cities were more compact and commerce was centered in the downtown. Scattered amongst the big banks and office buildings were the large, multistoried department stores. During the Christmas season shoppers would flock downtown and these stores competed fiercely for these people's shopping dollars. To attract customers the stores put up lavish decorations and, in their toy departments, they would create elaborate Christmas kingdom displays with Santa Claus enthroned in the middle. The highlight of the Christmas shopping season for children was a trip downtown with Mom and Dad to visit Santa Claus. They would stand in line and, when their turn came, would sit on Santa's lap. After assuring Santa that they had been good, or had at least were trying hard to be good, they would tell Santa what they wanted for Christmas. Santa would then assure them that he would do his best to give them the toy they most desired and then, after making their requests and got up to leave, Santa would reach into the big sack next to his chair and, reminding them to be good, give them a little parting gift.
For many years Montgomery Ward had filled their Santa's sack with a Christmas coloring book that they had specially printed each year. But this year the Montgomery Ward executives wanted something new and different. They also wanted to save money. So, instead of calling upon an outside firm to create the new item, as they had done in the past, they decided to have their own advertising department create the new giveaway.
Thus it happened that Robert L. May, a 34 year-old copywriter for Montgomery Ward, found himself charged with coming up with a new gift for their Santa to give to the little children. May went to work developing a Christmas story for children. As a child, May had always been small for his age and this had brought forth taunts and ridicule from the other children. Drawing upon his experiences of being somewhat different and an outcast, May set about creating a character with similar problems who, in the end, rises above his problems and is transformed.
The year 1939 was a difficult time in the life of Robert May. In addition to the worries of losing his job in the Depression that had engulfed the economy, his wife lay dying of cancer. Despite his own worries and grief, May had to be stoic and, setting his own grief aside, help his four year old daughter, Barbara deal with the trauma of seeing her Mother die. However, little Barbara, in her own way helped her Dad with the creation of Rudolph. Robert worked on the project in the office and then came home and tested out themes and story lines on Barbara. Work and home life converged in a way that both allowed father and daughter to come closer together as well as providing a diversion from the troubles that surrounded them. Some even credit Barbara with the naming of Rudolph, claiming that May tested different names on Barbara and Rudolph was the one that she enjoyed the most.
Robert May's creation was not the Rudolph the Red Nosed Reindeer song that everyone now knows so well and it was not the popular cartoon that is now shown on TV each Christmas. No, May's creation was a short story written in rhyming verse. It was the story of a little reindeer who was different due to a physical deformity – a bright red nose. Unlike the Rudolph we now know from the song and cartoon, May's original Rudolph lived an ordinary life with his parents in the woods. He did not live at the North Pole and his parents were not part of Santa's reindeer team. Oh, Rudolph had to deal with the taunts of the other little reindeer who shunned him because he was different. Like May as a child, Rudolph was lonely and had few friends. But, rather than dwelling on his problems, Rudolph had a positive outlook on life and did not let his deformity hold him back.
In the original story, Rudolph's big moment came when Santa landed his sleigh at Rudolph's home to deliver gifts to him and the other good little reindeer in the neighborhood. As Santa landed a fog started to roll in. By the time Santa had finished delivering presents to the little reindeer in the area, the fog had become dense, making it impossible for Santa to take off safely. With children all over the world expecting him to visit and leave presents, Santa had a dilemma – he couldn't see to take off in the fog but if he did not take off he would disappoint children all over the world. At that moment Santa noticed Rudolph with his shiny red nose and asked him to lead his sleigh. Rudolph agreed and Santa was able to make his deliveries. Following Santa's successful Christmas Eve journey with Rudolph in the lead, the story ends with Santa saying to Rudolph, "By YOU last night's journey was actually bossed. Without you, I'm certain we'd all have been lost!" This is a little different from the song and cartoon which end with the other reindeer praising Rudolph by saying he will go down in history."  Read about how Rudolph morphed here.

Isn't it fascinating the information we find out?  I'll bet many of you didn't know the origins of where the song came from. 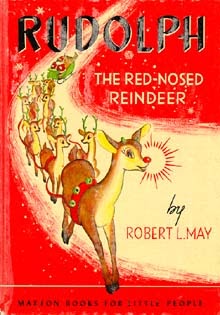 Email ThisBlogThis!Share to TwitterShare to FacebookShare to Pinterest
Labels: Miscellaneous