What happens when love comes at the wrong time?

And thus begins the sentence of one of the worst pieces of news (under wedding celebrations) that I've ever read.

Yes I know this post is not about my family nor is it about adoption.  Heck, I don't even take time to gossip or nay say about things I agree or don't agree with that much.  I try to be level-headed about most things and above all compassionate but this, oh this is just too much for me to handle. So yes this is actually me, DannieA being slightly annoyed [ok maybe more than slightly]

This Wedding Celebration announcement/article should be about two people coming together and getting married, but ugh the more I read the more I want to throw-up a little.  Hmmm we could sing the Brady bunch tune, yet....oh wait, both of them were still married to other people when they met and decided they were soul mates....yeah sanctity of marriage and all that crap.

It's stories like these that really make me glad I'm single and avoiding the craziness that is happening out there.

Take this wonderful section about the thoughts going through their heads:


Ms. Riddell said she remembered crying in the shower, asking: “Why am I being punished? Why did someone throw him in my path when I can’t have him?”
In May 2008, Mr. Partilla invited her for a drink at O’Connell’s, a neighborhood bar. She said she knew something was up, because they had never met on their own before.
“I’ve fallen in love with you,” he recalled saying to her. She jumped up, knocking a glass of beer into his lap, and rushed out of the bar. Five minutes later, he said, she returned and told him, “I feel exactly the same way.” Then she left again.
As Mr. Partilla saw it, their options were either to act on their feelings and break up their marriages or to deny their feelings and live dishonestly. “Pain or more pain,” was how he summarized it.
“The part that’s hard for people to believe is we didn’t have an affair,” Ms. Riddell said. “I didn’t want to sneak around and sleep with him on the side. I wanted to get up in the morning and read the paper with him.”
With that goal in mind, they told their spouses. “I did a terrible thing as honorably as I could,” said Mr. Partilla, who moved out of his home, reluctantly leaving his three children. But he returned only days later. Then he boomeranged back and forth for six months.
The pain he had predicted pervaded both of their lives as they faced distraught children and devastated spouses, while the grapevine buzzed and neighbors ostracized them.
“He said, ‘Remind me every day that the kids will be O.K.,’ ” Ms. Riddell recalled. “I would say the kids are going to be great, and we’ll spend the rest of our lives making it so.”
The problem was she could not guarantee that.
All they had were their feelings, which Ms. Riddell described as “unconditional and all-encompassing.”
“I came to realize it wasn’t a punishment, it was a gift,” she said. “But I had to earn it. Were we brave enough to hold hands and jump?”
They did jump. Both officially separated from their spouses by late 2008, though they waited until July 2009 before moving in together.
“I didn’t believe in the word soul mate before, but now I do,” said Mr. Partilla, who is 46 and in January is to become a chief operating officer of Dentsu, a Japanese advertising agency.

Ugh...people, marriage is a vow.  I understand divorce when there is domestic violence/abuse and outright secret adultery going on, but come on....you can decide to forgo or heaven forbid MOVE away if it's that much of a temptation.  After all, nobody said you weren't going to find people attractive or enticing after you married. 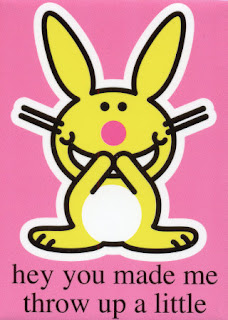 ugh, that is rather sickening.

I agree. What's wrong with people?

that is horrible Dannie! BLERG! Oh that makes me mad....just so mad I think I'll throw up a little too. ERG!

This does not tell the whole story of how people's lives were decimated in the process. It only speaks of an incredible selfishness where only the two people mattered. What happens when he or she meets another "soul mate" down the road.

Dannie, not all marriages are like this one. There are amazing people out there, but I am glad you are holding out. That you will not just say "yes" because you are desperate to have someone, anyone filling your bed or arms. I have a few friends recently who have met amazing mates in their "later" years, and you know what? They are so incredibly thankful they waited. I am so thankful they waited too. To see their happiness radiating from them b/c they found their true, God-given (at the right time) soul mate??? Awesome! Two of my friends have found someone never married before and God loving in their 40'-50's and I couldn't be happier for them.

Thank you for sharing that article even if it is disgusting.