Considering your choices! WHAT A JOKE

So I’m just going to come out and say it. This post will likely offend and/or trigger many of my readers. There you have been warned. Fair enough? Ok moving on.


Maybe it’s been the fact that this week I just have been in a funk and bent out of shape but today I saw a little red. In Spanish we have a saying which isn’t translated very well, but basically it is the same idiomatic meaning as “waking up on the wrong side of the bed”. Well many things have been rubbing me the wrong way lately, however, this one takes the cake.

I was at my local Christian bookstore buying a cute devotional for my mom (from Tigger to Grandma) for mother’s day as well as picking up a gift card so she can choose whatever romance novel she’d like to buy. Anyways I just decided to go into the parenting section to see if there were any good books that would catch my eye. Instead I catch a glimpse of this book: 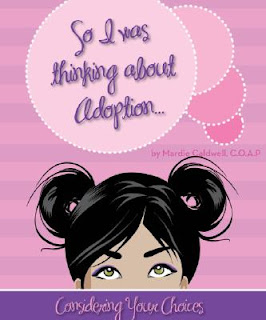 Yup that’s right, the title is “So I was thinking about adoption: Considering your choices” with a cartoon-like character at the bottom which clearly indicates that the book is geared towards young pregnant women. Well I just had to look….after all the last part of the title conveniently says CONSIDERING YOUR CHOICES. Nice right? Um no. There’s only one choice listed. Why one should REALLY, consider adoption [especially if you’re young, single and unmarried, and definitely not living on your own]. I nearly died. Bad enough that the back description practically begged people to put this book into the hands of a young scared pregnant woman, but there really aren’t any resources in the book (unless I missed it which *maybe* I did considering I was lost in shock and then realized Tigger had unloaded a bookshelf onto the floor costing me a dirty look from another patron) to guide a woman to look for help if considering parenting and how to access certain resources.

However here is a great page which totally is there to scare the crap out of women caught in a pregnancy:

This looks more like a scare tactic than anything. I will unabashedly say that nowhere did I see them proclaiming the 800 number for the local WIC offices or how to apply to online colleges where one can study at your own pace or at night if you have to. Oh and then the proclamation that this doesn’t cover if YOU want your kid to attend college or go to a Dr. appt. Hello it's called student loans and Medical or Medicaid…..no this page really doesn’t give a young person a heart attack. Gag me.

Then there’s the awesome “are you ready to be a parent page?”

Even if a woman answers YES to some of these questions, there are trick questions within there that you know one can’t say yes to…..(e.g. do you have TWO committed parents, What did you WANT when you were a kid and can you GIVE that to yours? ) So now if you wanted a Dodge Viper for a car when you turned 16 and you’re only 18 now and you know you won’t be able to give a Dodge Viper to your kid then you have to ponder that as proof that you may not be ready to be a parent?

Let me be very clear. This anger that I had in seeing this book in the Christian bookstore doesn’t mean I don’t value or don’t love my daughter. I do. What I have come to realize is that adoption is very complex and I don’t think people need to be coercing vulnerable young women in such a cutesy way that they think that adoption is the ONLY right thing to do. I am angry because this book and what I was able to read (it’s not a long book nor is it hard to read) in the bookstore today played more to fear and the very real stereotype and bias against single mothers (read the pew report if you don't think bias is still high) was quite coercive in it’s language and that’s just not right.

Since I am a Christian I will point out my beliefs. Adoption was never meant to happen. Neither was sin or domestic violence, or murder, or sexual molestation/assault, or physical and emotional abuse. Families were never meant to be apart. We live in a fallen world (if you believe in this way) and therefore such things do happen and will happen until the end of time and we are in Heaven. Then things will be as they should have been all along. Families will be together and there will be no more pain, nor fear, nor broken families requiring new families. We do what we can in this world and adoption brings people together in this world but always at a loss to begin with.

Also I question why this book was being sold in a Christian bookstore no less. Maybe I’m naïve, but wouldn’t people shopping there have a Christian worldview? Believe in the family unit and all that jazz? If one believes in the family unit one would think a family would step up to help another family member raise her child in the best way possible. Not….’hey honey we believe in strong family values, in our family in Christ, but oops you got yourself in this mess now it’s time to think adoption”.  Or "hey honey....sorry, you're 18, and we're not willing to go through it again....try adoption".  Unlike popular opinion of the nuclear family, when one decides to have kids, it's for life, not for 18 years.

So yeah that was my afternoon and it didn’t sit well with me. As I stated in an earlier paragraph, adoption will always be part of this world I believe. However, we should be sure that friendly and Christian based coercion is never a part of that. If a woman ultimately chooses to go the adoption route, I hope it’s because she truly feels that she wants to do it and not feel coerced because of books and literature similar to this.

While I agree that it was a scare tactic book, it is doing a good job of pointing out many things that young girls who are pregnant and in love with the idea of having a baby probably haven't thought of. Are they ready to be a parent? How will they support the baby?

Because the statistical truth is if you keep the baby it will be much harder and that is where the bias against single moms comes into play, because all too often the mom isn't ready and isn't able and that's how so many of these babies end up in foster care.

Was Tigger's mom ready to be a mom and rasie her daughter? Obviously not because you now have her. Think how Tigger wouldn't have the trauma of the horrible first foster home if instead the mom had adopted her.

You wouldn't have been able to adopt her through foster care, but she might have thought through a few choices better.

One thing I didn't mention in my post was any correlation of single parents and foster care. Just reading some files (Tiggers) and knowing about other cases we're also talking about people that probably don't have parents shopping in the Christian bookstore....or great family system in general. If Tigger's mother would have had a better support system, then no I wouldn't be Tigger's mom....and I am well aware of that fact and ok with that fact...I'm not silently rejoicing that everything was a fail so I could 'have her'.

I know a couple of people that are First mothers...IRL and online. This post was not written to make them feel bad...I feel that if a woman makes a choice, it should be because she was aware of all options including resources that include Medicaid, WIC, financial help for college including daycare on a sliding scale etc. and then chose her path.

I've also seen 2 friends IRL become mothers at a young age 17, 23 and single and they worked their butts off to where they are today...still parenting their kids and doing ok....not rich but ok.

Thanks for the comment...I don't mind differing opinions, heck I read them all.

I don't have any kids, nor will ever have any kids, nor need to weigh-in on any kid issues, but I just have to say- Do you ever watch "16 and Pregnant" on MTV? There was a girl, 16, pregnant (hence the title) but her parents (she was adopted btw), especially her mother that just set their foot down and said "You're giving it up for adoption." As I watched it I thought "Wow, when this girl gets older and watches this show she's really going to hate her mother." Anyway, that's how I saw that situation turning out.