Are you guys 'stuffed' yet?  If you are anything like our family, we completely have a tendency to overeat.  We cook like we are going to feed an army and usually have tons of leftovers.

This year was different in that we only stayed until around 7pm as it's Tigger's bedtime and she doesn't do well if her schedule isn't followed.  That being said, she had a blast.  She ate a lot of food, she ran around the house trying to keep up with older cousins, and she was her unique self.  She only likes certain people, and will not give you the time of day unless she feels like it, so sometimes she would ignore certain relatives, and sometimes she was friendly as if everyone was BF F's.

In all this state of happiness can you believe that I actually didn't take one stupid picture at all yesterday?  That's quite bizarre of me; the picture taking queen.  In fact, not many people took pictures, most were just sitting around, relaxing and conversing as if we don't see each other the whole year.  It was nice warm family fun.

Now I'm taking some time to write during nap time.  We did spend the night at grandpa and grandma's last night which means Tigger mostly slept in my bed....I think she thinks that it's too cold at their house to sleep by herself.  This morning, Tigger and I were awakened by Christmas music and Tigger had a full conversation with me at 8am, however, I have no idea what she said, but it was full of finger pointing, exclamations, and vocal intonation, so I'm assuming she was telling me something important.  Grandma tried to get Tigger in the Christmas spirit by having her help decorate the Christmas tree, however, Tigger isn't at that "excitement" age yet, however, I did hear her imitate "tree" and "Santa Claus" so we're off to a good start. 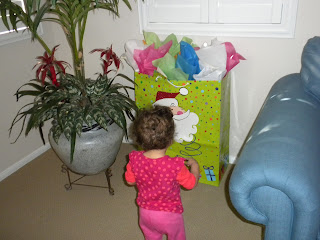 The morning after....Apparently Santa Claus is working early as well this year...?????? 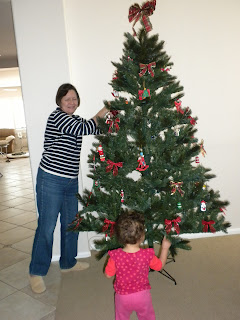 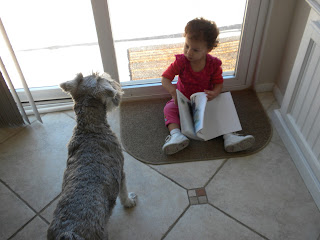 Telling grandma's dog to go away because she wanted to read in peace.
Posted by DannieA at 12:27 PM

Email ThisBlogThis!Share to TwitterShare to FacebookShare to Pinterest
Labels: Miscellaneous

Cute pics!! My parents have the same kind of dog- my kids love her ;)